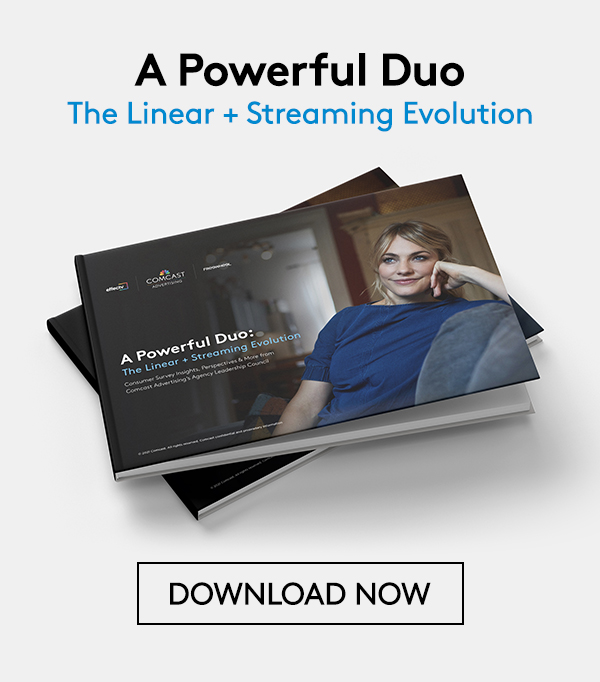 Comcast Advertising’s Agency Leadership Council has published “A Powerful Duo: The Linear + Streaming Evolution.” The paper uses third-party survey data from Happydemics and Nielsen and first-party data from Comcast’s millions of households to reach a singular conclusion: the most effective advertising campaigns combine TV and streaming.

Streaming has exploded in popularity. In the first half of 2021, streaming services accounted for nearly half (45 percent) of all ad views, surpassing “TV Everywhere.” Nearly eight out of 10 households (79 percent) are Subscription Video on Demand (SVOD) consumers, and more than 80 percent of those households subscribe to two or more SVOD services.

Yet some 70 percent of households still subscribe to cable/pay TV, and nearly three-quarters of those households (76 percent) consume streaming content via their TV screens. Among streaming households, viewers spend 40 percent of their time with cable TV, 31 percent with streaming, and 14 percent with broadcast content. Despite streaming’s rapid and growing adoption, linear TV is still the dominant source of video content for most households.

The new Comcast Advertising study also delves into how streaming viewership preferences differ across age groups and device types. It also offers guidance regarding the optimum advertising investment balance between linear TV and streaming. But the bottom line is: combining TV and streaming results in maximum reach, efficiency, and effectiveness.

Download your copy of “A Powerful Duo: The Linear + Streaming Evolution” today. Ensure that your campaigns take maximum advantage of the combination of streaming and linear TV.